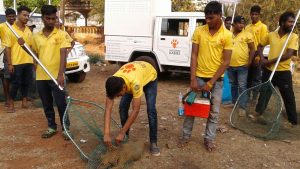 Mission Rabies, a charity set up by UK veterinarian, Dr Luke Gamble, to help to eliminate rabies has received a grant from the Rotary Foundation, a global organization based in the USA, to support its rabies-control projects in Goa, India.

The grant was initiated by three Rotary Clubs in Gainesville, Florida, USA, in partnership with the Panaji Mid Town Rotary Club and four other Rotary Clubs in Goa. It will provide vehicles and driver salaries for Mission Rabies’ vaccination projects in the Indian state. To date, more than 187,554 dogs have already been vaccinated as part of this campaign which began in 2014 and aims to make Goa a rabies-free state.

Gainesville Rotarian Professor Colin Burrows worked with colleagues to secure the grant.   A past president of the World Small Animal Veterinary Association, Professor Burrows is also trustee of Mission Rabies USA.   He said: “Globally, at least one child dies from rabies every nine minutes. Thousands of animals also die an agonizing death. The vast majority of human deaths are caused by bites from infected dogs and it has been shown that human cases can be significantly reduced by vaccinating the dogs, a much more cost-effective option than vaccinating people.

“When I heard a past Rotary District Governor tell us that the battle against polio was almost over, I wondered if we might encourage Rotary to join the fight against rabies. Our then Rotary Club president encouraged me to lead an effort to submit a global grant request to the Rotary Foundation. We found other Rotary Clubs and Rotary Club partners in Goa willing to support our grant submission and I’m delighted that the grant has now been awarded. I’m grateful to my Rotarian colleagues and hope that other Rotary Clubs from around the world will also come together to support Mission Rabies’ work.”

The WSAVA’s charitable Foundation also continued its support of Mission Rabies during 2017, most recently through donating the proceeds of its ‘Fun(d) Run, organized during WSAVA World Congress in Copenhagen, to the charity.

Dr Luke Gamble said: “Mission Rabies is indebted to the Rotary Foundation for its generous support. This grant will provide a dedicated Goa state rabies response team which will strengthen our efforts to safeguard human and animal health by eliminating Rabies completely from Goa. Surveillance and rapid response are key elements of the project and, without the support we have received from the Rotary Foundation, it would be impossible for us to deliver them.”

He added: “We are also grateful for the continuing support we have received from the WSAVA and the WSAVA Foundation this year. They have been behind us from the start and we greatly value the contribution they have made to our work and the strong collaborative relationship we have established. We look forward to continuing to work with them and with other stakeholders to ensure that we meet the OIE’s goal to eliminate human rabies by 2030.”

The WSAVA represents more than 200,000 veterinarians worldwide through its 105 member associations.