The Blue Dog Programme, an educational initiative to help children to interact safely with dogs, has been awarded the World Small Animal Veterinary Association’s (WSAVA’s) 2017 Global One Health Award. The award will be accepted by Professor Tiny de Keuster, a European Veterinary Specialist in Behavioural Medicine (Companion Animals) and founder of the programme.

Through her work as a behaviourist, Professor de Keuster, a visiting professor at the University of Ghent in Belgium, was involved with a number of studies which highlighted that injuries from dog bites were a significant problem in Belgium. Most of the injuries occurred in young children in their own homes and were inflicted by a familiar dog. Concluding that current bite prevention programmes were ineffective, she was inspired to create Blue Dog with the support of the Federation of European Companion Animal Veterinary Association (FECAVA); the Board of the European Society of Veterinary Clinical Ethology (ESVCE); the British Veterinary Behaviour Association and Dogs Trust.

The Blue Dog Trust was created November 2005 as a non-profit organisation and was launched at the joint WSAVA/FECAVA Congress held in Prague in 2006. Since then, Blue Dog has evolved to offer a range of educational resources for children, parents and school teachers, including an engaging website, fact sheets and a DVD and accompanying booklet for parents. In addition to offering advice to help reduce the risk of dog bites, Blue Dog also provides information on selecting the right dog; the benefits to a family of owning a dog and offers guidance on where to get a dog and on responsible dog ownership. Its work has spread around the world with more than 80,000 copies of its DVD distributed to 21 different countries and the accompanying Blue Dog booklet translated into 17 languages.

While it is the brainchild of Dr de Keuster, Blue Dog was created by a team of veterinarians, behaviourists, child psychologists, school teachers and teachers from the Royal Academy of Fine Arts in Ghent. Its scientific input is based on feedback from a team of international behavioural specialists and the efficacy of selected scenes from the DVD as a learning tool was assessed by Dr Kerstin Meints from the Lincoln Infant Laboratory, University of Lincoln, UK, and supported by the Dutch Veterinary Association.  The Blue Dog animation was created by artist Soraya Verbeke as part of her graduation from the Royal Academy of Fine Arts in Ghent. Her mentors, Carlos Dekeyrel and Willy van Driel, also contributed to the artwork. Others contributed to the sound and vocals of the DVD and to the creation of the resources.

The WSAVA Global One Health Award is presented by the WSAVA’s One Health Committee (OHC) to an individual or organization which has promoted an aspect of One Health relevant to companion animals. Commenting on the Award to Blue Dog, Emeritus Professor Michael Day, Chair of the OHC, said: “Dog bites account for tens of millions of injuries annually, with the highest risk occurring amongst children. Blue Dog is an inspiring example of a project that aims to tackle this problem by providing a science-based, but practical solution. It is a perfect example of One Health in action and we are delighted to recognise Blue Dog’s achievements with the award of this year’s Global One Health Award to the Blue Dog team.”

Professor de Keuster will receive the Award during WSAVA World Congress 2017, which takes place in Copenhagen, Denmark, from 25-28 September. She will also deliver the annual WSAVA One Health Award Lecture during World Congress. Her lecture is entitled: ‘Safe relationships between children and dogs: A One Health approach.’

Commenting on receiving the Award, she said: “To receive the WSAVA One Health Award is a huge honour.  Many people have worked together to create this project. It is difficult to single out one individual but the late Ray Butcher, who was well known to WSAVA, was an inspiration to us all and did so much for Blue Dog.

“Moving forward, we still have a great deal to do and are now harnessing the latest technologies to help to bring Blue Dog to an even wider audience.”

The WSAVA aims to advance the health and welfare of companion animals worldwide through creating an educated, committed and collaborative global community of veterinary peers. It currently represents more than 200,000 veterinarians through 101 member associations. Its annual World Congress brings together globally respected experts to offer cutting edge thinking on all aspects of companion animal veterinary care. 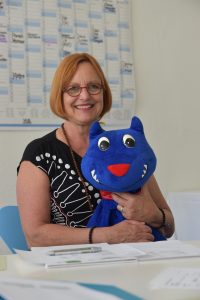